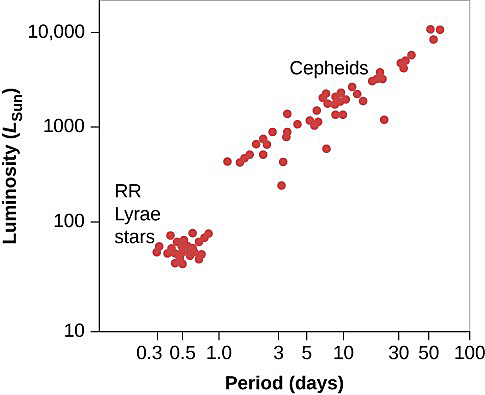 RR Lyrae are variable stars that are in the Red Giant phase, late in the star’s evolution. Due to instability in these Red Giant stars, their size and therefore luminosity changes periodically. Similar to Cepheids they exhibit a period-luminosity relationship which allows their luminosity to be determined from their period. Unlike Cepheids, this does not work well in the visible spectrum, but it does in Infrared. Alternatively the colour-period relationship is being used for RR Lyrae.

RR Lyrae are low metallicity stars, meaning that they are original old stars and typically found in globular clusters above and below the galactic plane of our Milky Way galaxy. Therefore these stars are used to determine the distance to those clusters. Because these stars are not very luminous they can only also be observed in the most nearby galaxies, but not beyond. 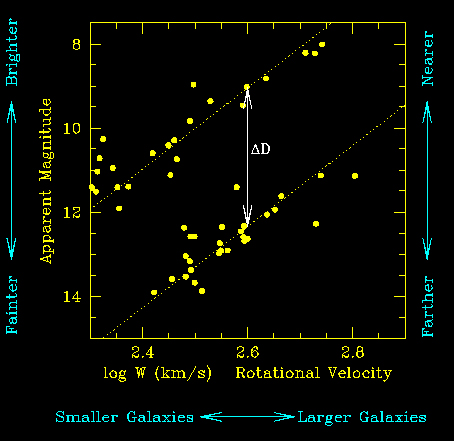 The Tully-Fisher relation describes the link between the luminosity of a spiral galaxy and its rotation. The rotation of a galaxy causes a widening in the spectral emission lines that can be observed.

Basically the assumption is that the bigger the galaxy is (and thus more luminous), the faster it rotates. The detailed physics of this relationship is beyond the scope of this EBook, but it is important to mention that the Tully-Fisher relation is being used as a standard candle to determine inter-galactic distances since 1977.

A similar method is the Faber-Jackson relation published in 1976.

In our EBook Stellar Evolution we discussed the Type Ia Supernova, which is a core collapse of a White Dwarf in a binary system. The importance of this type of event as a Standard Candle is the fact that in principle the Supernova produces a consistent peak luminosity which is related to the Chandrasekhar limit, above which the White Dwarf re-ignites. The observed light curve of the supernova can give an accurate measure of its peak luminosity, which makes these events very important for measuring distance. An obvious limitation of supernovae is that you have to catch them when they go off; they don't hang around.

A big advantage is the fact that these supernovae, similar to the previously discussed Tully-Fisher relation, can be observed up to extremely large distances of up to ten billion ly (1010 ly).

There is more
We discussed the most commonly mentioned Standard Candles with which distances are being measured in astronomy. There is a lot more to this and sizing up the Universe is one of the biggest ongoing technological challenges in astronomy.

A good overview can be found here

On page 4 we already mentioned the playlist on YouTube by PhysicistMichael.