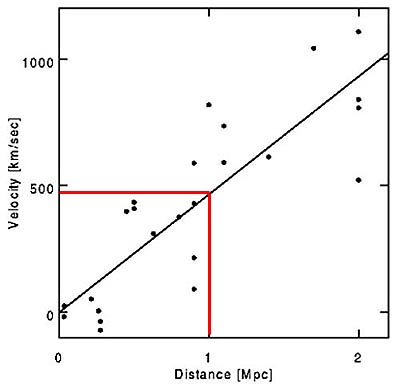 Hubble and Humason were able to plot a trend line from the 46 galaxies they studied. Though there was considerable scatter in the data, the conclusion was made that recession velocity and distance are proportional, and they obtained a value for the Hubble constant of 500 km/s/Mpc (this constant determines the slope of the line in the graph). Hubble estimated a value of about 500 km/s/Mpc (red line).

This original value is far from the modern value, primarily because of the difficulty of acquiring accurate large distances in space, and the fact that they used nearby galaxies, that also have their own peculiar velocity with respect to the Milky Way. As an example, the Andromeda galaxy is now known to have a velocity towards us (blue shift) of 300 km/s. The expansion of space can only clearly be demonstrated with objects that are much further away.

At present this relationship between distance and velocity is referred to as Hubble’s Law and it is the foundation for the cosmological model of an expanding Universe. There is no doubt about its validity, although the actual value of Hubble’s constant (the ratio between velocity and distance) has been under discussion ever since 1929. Finding the present value of the Hubble constant has been the result of decades of work by many astronomers, both in analysing the measurements of galaxy red shift and in calibrating the steps of the Cosmic Distance Ladder. During these decades, the value of Hubble’s constant has been the subject of many debates among astronomers. Hubble’s original estimate was 500 km/s/Mpc, but we now know that the value is much smaller.

Above we reviewed the history of the discovery of the expanding Universe which is one of the biggest breakthroughs in Cosmology.

Let us now go back to cosmological redshift as a consequence of this expansion.