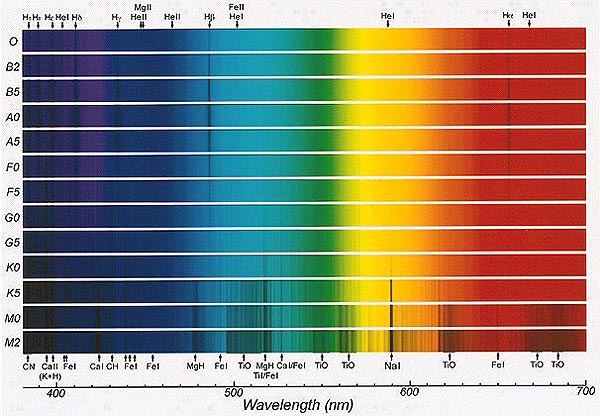 Astronomers have classified stars according to their spectra into spectral classes (also called spectral type).

The major spectral classes are type O, B, A, F, G, K, M where the O-class is the most luminous (and hottest) and the M-class is the faintest (and coolest). Each type is subdivided into 10 finer divisions (0-9), as A8 or F0.

The picture above shows standard spectra for each class.

The historical reason why this sequence seems arbitrary, is that initially the classes were defined alphabetically according to strength of the spectral lines. Later it was discovered that this is not directly related to temperature. So the original sequence was re-arranged according to temperature.

Classifying stars used to be something of an art form that comes with practice. Each spectral class is defined by the spectrum of a standard star (above), against which the other stars are compared. The classifier eventually memorizes the standards and can classify the spectrum of a random star very quickly.

Modern classifiers are now using automated systems with computers and complex software, that will give more objective results.