We discussed that we can find out various properties of stars simply from their position in the HR-diagram. Let us now discuss a few typical examples related to the size of stars.

Credit of Images on this page 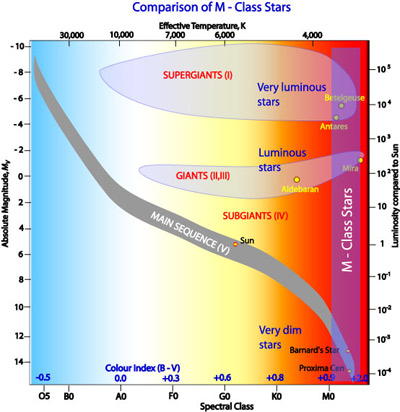 If we compare all stars that fall in the spectral M-class (figure left) we see at the bottom Proxima Centauri and Barnard's Star. These are red dwarfs that fuse hydrogen into helium but do so very slowly because they are relatively small.

Going up in the diagram we find a star called Mira which is much more luminous than the red dwarfs. Further up we find the very luminous Antares and Betelgeuse.

Luminosity here depends very much on the size of the star, hence its surface area. Low temperature stars that are much larger than any other, will emit more energy per unit of time, i.e. have higher luminosity. 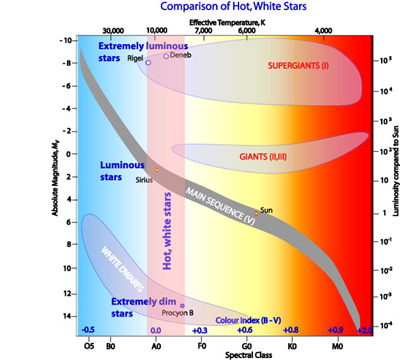 If we now do the same for the hotter spectral A-class, we see at the bottom the White Dwarf Procyon B which is very hot but also very small, i.e. has relatively small surface area and thus low luminosity.

At the top we see the extremely luminous stars Rigel and Deneb, which shows that these stars are much bigger than Sirius and classified as Super Giants. 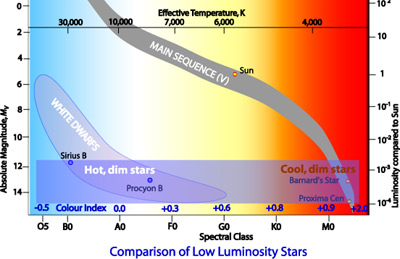 Finally we compare stars with similar low luminosity. The White Dwarf Procyon B has the same low luminosity as e.g. Barnard’s Star, but is much hotter. This means that while they have similar luminosity, Procyon B must be much smaller (has less surface area) than Barnard’s star.

As we saw above, for main sequence stars we can infer the mass of the star from where it is in the main sequence, or from its spectral class. Because all these stars fuse hydrogen into helium, the main process during a stars’ lifetime, the difference in spectral class or temperature must be directly related to the mass of the star. Stars with more mass have a higher core temperature and thus fuse hydrogen faster than low mass stars. They also have a shorter lifetime. We discuss this further in our EBook ‘Stellar Evolution’.